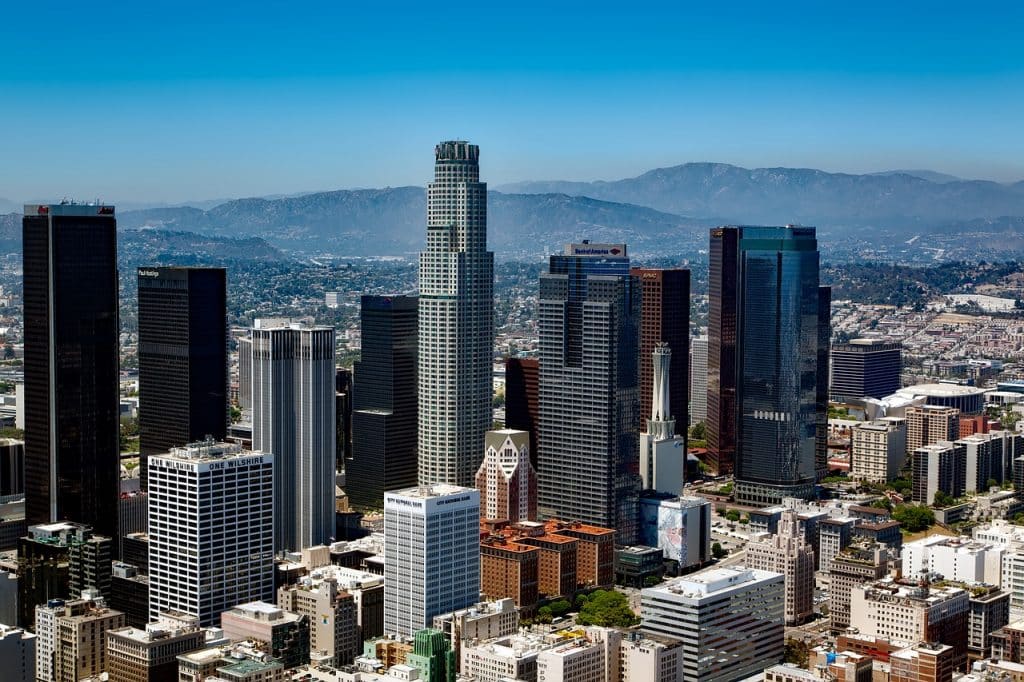 Los Angeles is a city in Southern California and the center of the nation’s film and television industry. It holds many distinctions and is known as the entertainment capital of the world. The city includes a group of inland valleys, a coastal plain separated by low mountains that are interspersed with steep passes, an arc of still higher mountains, and a long seacoast.

Nearly half of the county is taken up by mountain chains, most of them running east-west that have a dynamic history of earthquakes, firestorms, and mudslides. Numerous geologic faults cause periodic tremors, and the strong, dry Santa Ana winds pose the threat of fires spreading into the brush-covered hills around the city. The climate of Los Angeles is the Mediterranean, with long, dry summers and rain from occasional winter storms. Temperatures vary greatly between the milder coastal areas and the interior.

In summer, cool sea air drawn in under hotter air creates a temperature inversion, trapping air pollutants from industry and the huge number of automobiles, and causing smog. Los Angeles is similarly diverse when it comes to religion. The region is home to the largest Catholic archdiocese in the nation, the Roman Catholic Archbishop of Los Angeles; the Los Angeles California Temple, the second-largest temple operated by the Church of Jesus Christ of Latter-day Saints; and the nation’s second-largest concentration of Jews, 621,000 in the metropolitan area.

If you are planning to shift to Los Angeles and want to buy a house in this city, all you need is a Mortgage broker in Los Angeles. PierPoint Mortgage is the one-stop solution for you. We do everything we can do to overcome the obstacles you are facing and help you buy a home. We can also help you with refinancing your mortgage and reverse mortgage to convert the equity in their home into cash.

We can also help you with refinancing your mortgage and reverse mortgage to convert the equity in their home into cash. The proceeds can be used for any purpose and are available in a variety of payment methods such as lump sum cash payments, monthly payments, or an Equity Line. Visit us at 3680 Wilshire Blvd Ste P04, Los Angeles, CA 90010, or call us at (475) 224-2122.

5.0
PierPoint Mortgage is the best! I had a pleasant experience with them. I am soon going to contact them to complete the final formalities of the home loan application. They are best at their work.

Tamara Jazlene
23:10 05 Apr 21
PierPoint Mortgage recently assisted me with a loan for a house. The team was always very helpful and provided varying options for me. I always thought and felt they were doing their best for me.

Marina Yates
23:00 05 Apr 21
Very competent advice! All the facts were discussed immediately at the initial meeting. You can tell that job is fun Highly recommend PierPoint Mortgage!

Rowan Jacquelyn
22:51 05 Apr 21
We felt comfortable right from the start. There are no questions left unanswered. An excellent service provider. Thanks a ton, PierPoint Mortgage.

Manning Clauson
21:52 05 Apr 21
Highly recommend PierPoint Mortgage. Very professional and uncomplicated. I felt very well advised throughout and received a financing offer that was perfect for me.

Bernice Lokken
21:22 05 Apr 21
They did a great job for us when buying a property in Alexandria. The services of PierPoint Mortgage did not end with getting a loan but they stayed cooperative until the very end of the whole process.

Rodney A.
20:51 05 Apr 21
We were well supported by PierPoint Mortgage in finding the right financing for us, even though the issue was a bit more complex.

Charles Mills
20:37 05 Apr 21
The team was extremely helpful and friendly. PierPoint Mortgage gave a favorable rate and I would happily recommend them to anyone.

Aaron Loewenthal
20:28 05 Apr 21
The team was amazing and made buying a house feel not only possible but easy! There was always clear communication, speedy answers, and a wealth of knowledge. I highly recommend PierPoint Mortgage.

Marilyn M. Harbor
18:42 01 Apr 21
Thank you to the staff for everything you did for us, you went above and beyond. Would Definitely recommend PierPoint Mortgage for the home purchase, you won’t be disappointed.

Mehl T. Stiger
17:51 01 Apr 21
PierPoint Mortgage was awesome and helped us throughout our loan process. We just purchased our home with no money down and closing included so we walked out of closing with our new home and a small check. We had a great experience!!!!!

Kelly Floyd
17:41 01 Apr 21
I would highly recommend PierPoint Mortgage to anyone looking for a mortgage loan.

Georgiana Lewandowski
17:31 01 Apr 21
PierPoint Mortgage gave wonderfully professional service and very clearly answered all of my questions patiently. I would highly recommend the services of this company.

Dorthy Payne
17:22 01 Apr 21
They guided me through the loaning process and helped me become a first-time homeowner! I am very happy😊😊 with the services of PierPoint Mortgage.

Karen Johnson
17:03 01 Apr 21
I am very thankful to these guys for getting things done for me. PierPoint Mortgage had been a helping hand for me. I highly recommend them.

Warren James
16:53 01 Apr 21
Thanks, PierPoint Mortgage for helping us in our first home buying experience. I will highly recommend them.

Teresa Helms
16:46 01 Apr 21
The staff kept me informed during the entire process and were very easy to work with on gathering all the information needed to complete the loan process without issues. PierPoint Mortgage helped us a lot.

Joy Nyman
16:35 01 Apr 21
The loan officer from PierPoint mortgage, made our first home purchase so much less intimidating through their constant communication and professional knowledge. Highly recommended services.

Mary Latimer
16:23 01 Apr 21
Great, professional, informative to new home buyers like myself, and the staff at PierPoint Mortgage is quick to respond to queries. Thank you, team!!

Alvarado Andersen
17:32 25 Mar 21
They are quick to respond to any questions, have great attention to detail, and provide excellent customer service by PierPoint Mortgage. Highly recommended!

M. Polanco
17:24 25 Mar 21
Just finished refinancing our home. PierPoint Mortgage was a joy to work with. Kept us posted with any updates throughout the process. I highly recommend them for their great work!

Ian Anderson
00:13 25 Mar 21
Great to work with! Easy going the whole time. Felt like I was not getting cheated on anything and was in the loop the whole time. Highly recommend PierPoint Mortgage.

Melissa Esteban
00:06 25 Mar 21
PierPoint Mortgage was extremely good at getting my loan processed and approved. I greatly appreciate the efforts put forth by the staff. Thanks for getting it done! 😊

Shayna Chen
23:44 24 Mar 21
The entire team of PierPoint Mortgage was phenomenal! From start to finish the home buying process was smooth and seamless! Highly recommend it to anyone looking to make a new home purchase!

Devan Aracely
23:28 24 Mar 21
Great company to use. Very easy process, took all the anxiety out of closing on my conventional loan. I will definitely PierPoint Mortgage again.

Saran Chantell
23:15 24 Mar 21
They are a very professional and efficient team. They helped a lot in the entire process and got me a jumbo loan for my new house🏘. I would definitely recommend the services of PierPoint Mortgage.

Ahmed Lamont
22:46 24 Mar 21
I had the pleasure of working with this team. The team was amazing and answered all our questions. They made our First home purchase seem so easy! Thank you PierPoint Mortgage for lending us an FHA loan.

Giancarlo Ben
22:38 24 Mar 21
Just recently bought a home and worked with PierPoint Mortgage. The great team broke everything down to an exact. Would recommend Them. Answered every question. They were quick to respond always.

junior casen
17:49 22 Mar 21
I'm extremely grateful for the professional guidance, service, and support I received from PierPoint Mortgage. I highly recommend the services of this company.

Kenneth Ferrell
17:42 22 Mar 21
Everyone I have encountered during the entire process was very professional, responsive, serious, fast, experienced, and customer-centric. Thank you PierPoint Mortgage for giving me an FHA loan.

Kimberley L.
17:38 22 Mar 21
My experience with PierPoint Mortgage has been exceptional. Every time I work with or even ask for advice from them, they are very eager to assist. Their knowledge is incredible as well as his professionalism. They make obtaining a mortgage easy and stress-free. I certainly recommend working with this company.

Abbey Marquise
16:04 22 Mar 21
PierPoint Mortgage was amazing and handled every difficult detail with no stress. Very responsive to answering texts and emails. Very smart and capable and took care of everything. One of the smoothest transactions I've ever been with. And we never met in person. That how trustworthy they were for me. Definitely recommend or use them again!

Francis Jeramiah
15:57 22 Mar 21
PierPoint Mortgage is an exceptional mortgage company and this process couldn’t have been any easier or pain-free with them. Thank you, guys!

Adonis Noble
15:52 22 Mar 21
Super excited and happy with the help PierPoint Mortgage gave me in refinancing my home. The service was excellent and fast. I recommend their services 100%.

Crane Becker
15:47 22 Mar 21
The customer service provided from beginning to end was excellent. The team was always there to answer any of my questions and being a first-timer, I had a few. I would totally recommend their services. Thank you PierPoint Mortgage!

Jolie Miley
15:43 22 Mar 21
PierPoint Mortgage helped my wife and me get approved for our first home loan. They kept me informed throughout the process and hit the deadline without a problem. I would recommend them to anyone looking for a mortgage.

Vargas Paige
15:32 22 Mar 21
Excellent customer service, very patient considering I am not the easiest person to work with. They got us an excellent rate and I am very appreciative. Thank You PierPoint Mortgage.

Jayvion Braiden
15:26 22 Mar 21
PierPoint Mortgage holds great responsibility for providing knowledgeable and helpful information on loans for different home purchase sections. I wanted to know about the conventional loan, these guys have been very helpful and great at work.

Donna Hiner
05:36 20 Mar 21
The process was great in general and I faced no challenges while getting a USDA loan from PierPoint Mortgage. They have been very helpful and beneficial.

Bernard Hardy
04:39 20 Mar 21
They have been very professional at work and provided the best USDA loan service. I am so happy and satisfied with PierPoint Mortgage.

Keith Morrison
21:22 17 Mar 21
It was simple and easy to contact PierPoint Mortgage. They have been very polite and reliable over the call. I wanted to get a USDA loan and that too in very less time. Though they provided the best mortgage service and I am happy!

Lorraine Burdick
21:11 17 Mar 21
Superb company to start with USDA loan. They facilitated prompt service in an amazing way and such an effective manner.

Andrew Bacchus
21:04 17 Mar 21
PierPoint Mortgage facilitates great conventional loan service and from start to finish they have been very responsive and reliable.

korvin davion
20:45 17 Mar 21
Being a first home buyer, the process of financing a property is not easy. PierPoint Mortgage helped us a lot and got me an FHA loan for my house.

With 50 years of experience in the industry, PierPoint Mortgage is offering the finest mortgage services. We deal in various mortgage programs that will help you become a proud homeowner.

PierPoint Mortgage, LLC, was founded in 2003 and had been offering brilliant services ever since. It is a nationwide mortgage broker that has over 50 years of mortgage experience.